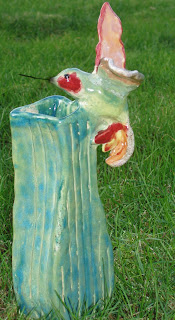 The directions said, Spread heavily - weight or clamp, wait 35 minutes. I squeezed on the glue, then wedged that piece into its original place.

And then I held it.

I felt like Horton the Elephant sitting on his nest, patiently, obediently. There was nothing else remaining. The house was quiet and I was alone with my forlorn, once-beautiful work of art. I sat holding the piece in place, both my hands needed. I sat breathing, humming a little. I held the vase together - for 35 minutes.

I realized it's not the fixing that's difficult. It's the holding. None of us wants to have our hands tied up that long. It feels a bit wasteful and foolish when there are so many other things to be done.

But the piece held. And I went on with the next wing. Twice more I sat for half an hour, breathing, holding, waiting. At some point I realized what I was doing was a kind of prayer.

And that's all I need to do when a thing is broken. Sit. Wait. Hold. Breathe. Believe, if at all possible. Believe.

When a thing is broken, the question to ask is not: "Can it be fixed?" but:

"Who will hold the broken piece?"

Who will realize the value of what was once beautiful? Who will hold this thing lovingly, gently? Who will wait for it?

Who will hold the broken piece?

I found out my hands could do this thing, and I was as delighted with the repair as if I'd been the original artist. For there is a gift in this. A wholeness. A bird waiting to take wing.
Posted by Christi Krug at 3:59 PM 1 comment:

My daughter sculpted a tall, ceramic sea-green vase with a hummingbird perched on top. It sat on the kitchen table holding a spray of lilies, and we all admired it. Then one day in the bustle of living it was knocked over, and the hummingbird's graceful, rosy wings were broken.

We kept the vase and broken wings on a shelf. Every time I walked by, I felt a sense of loss. Could it be fixed? Probably not. If the wings were glued back on the bird, the vase would be too heavy and awkward to allow the broken pieces any support while drying.

Then one evening, home alone, I passed by the vase again and just knew I couldn't let it sit broken. I remembered how adults in my family long ago would fix the odd tea saucer or knick knack. They didn't use Superglue, or School Glue, or Glue with Glitter. No Blue Gel or fancy scented goo. What we had was "Elmer's Glue All." I hunted some up.

First Rule of Fixing Broken Things: You don't need a high-falutin' adhesive. You probably already have what it takes. And help is closer than you think.
Posted by Christi Krug at 4:35 PM No comments: